The Submarine of Walker Lake, by Brendan DuBois

Correction made, thanks to Kevin Tipple.

Great title, huh?  This is DuBois' seventh appearance in this blog, which ties him with Terence Faherty.  It's not a typical DuBois story, being funnier and shorter than I am used to from him.

Sean Sullivan, our narrator, is an ex-Bostn cop, having lost his job in a reshuffle after a scandal.  The only job he could find was as a patrolman in a small town called Walker, New Hampshire.  He is still getting used to the place and the pace, and when some odd assignments come in he isn't sure whether someone is pranking the new boy.

For example Lon Kotkin claims he has seen a submarine in Walker Lake.  Is he nuts, Sullivan asks the chief.  "Compared to what?" is the reply.

I won't spoil the best line in the story by repeating it here, but it involves a bad guy asking a classic question and getting a rather startling reply.

Queen and Country, by Robert Mangeot 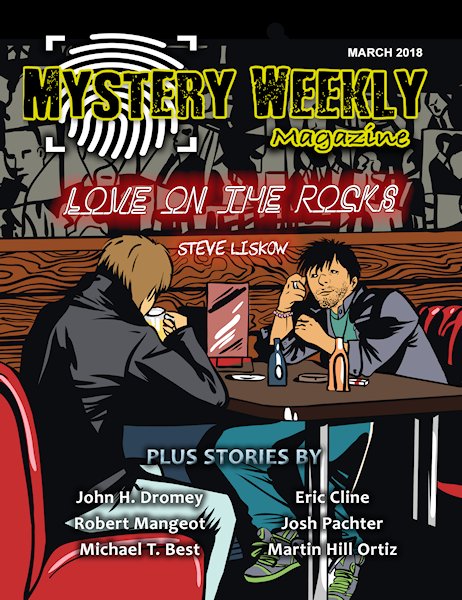 This is the third appearance by Robert Mangeot in these hollowed electrons.  He is all about language and this time is practically in Wodehouse territory.

Well, technically he's in rural France in the late fifties, or at least Nick Torthwaite is.  Nick is an arachnologist, sent over from Britain to hunt for a tropical spider.  Or maybe he's hunting for his despised fellow scientist who traveled there first, in search of the precious queen spider.  In fact, both of them are working for the British government who thinks the deadly spider may have military uses.  But other forces are a t work here and may kill Nick before ge can get to the spider or before the beastie can get to him...

I talked abou the language, so here is our hero bragging about himself and "...the Nick Torthwaite-in-the-field look. Stubble, chronograph, safari vest and poplin slacks, I cut a dashing if stocky figure, the famed scientist after his quarry."  Good luck, Nick.

Posted by Robert Lopresti at 12:07 PM No comments:

This is Martin Limón's fourth appearance here.  I am a big fan of  his stories about George Sueño and Ernie Bascom, two Army CID officers in South Korea sometime in the mid-seventies, combating deadly soldiers, corrupt civilians, and bosses more concerned with the chain of command than the chain of evidence.

In this case the National Police's chief investigative officer, Mr. Kill,has called them in because a cab driver was robbed and badly beaten by three young American men. Who could they be but some of the G.I.'s in the country?  Worse, the cabbie's passenger was kidnapped with the car: a young woman.

And so Sueño and Bascom are on a desperate search to find three soldiers out of 50,000, before something terrible and terminal happens to their victim.

Limón spent ten years in the army in Korea - although not a cop like his heroes a and as they think through the problem (Who would have had access to diesel to burn up the cab?  Which of the dozens of army bases were large enough to hide a woman on but small enough that the guards might let you get away with it?) it is clear that he knows his subject matter thoroughly.


Posted by Robert Lopresti at 3:31 PM No comments:


This is Pronzini's second appearance here.

Brevity is not an obstacle to greatness in a short story, but it sure can make it hard to write a review that doesn't give away the store.  This story is under 2,000 words so I won't have much to say about it, good as it is.

Henry Boyd's life changed forever when a moment of his own carelessness destroyed his family.  He hoped to be sent to prison but the courts thought otherwise.  He can't face the thought of suicide so now he walks through the night, hoping some criminal will do to him what he lacks the courage to do to himself.

Instead, what happens is... See?  This is where I have to stop.  But the last sentence is sheer poetry.
Posted by Robert Lopresti at 1:01 PM No comments: