Graham Powell was kind enough to send me a copy of this e-collection of short stories.  As you probably guessed, the protagonists are not quite heroes.  Most of them come to bad, if very interesting, ends.

Take Tommy Roccaforte, the main man in our current story.  The witness protection program has just dumped him far from his home in Staten Island, supplying with a nothing job in a second-hand bookstore.  But -- and here is what I love -- Tommy approaches the business like the wise guy that he is.  Who is the competition?  And how can we destroy them?  So the big box chain bookstore had better watch out. The story is witty, with big hints of Elmore Leonard.

Having said that, I have to register a big complaint: I don't buy the ending at all.  Some of the choices made by people around Tommy don't make any sense to me, and one of those characters is just too paper-thin for the role.

You can find a better ending in Powell's "The Leap," in the same collection, but it doesn't have a concept as dazzling as  "Grace."
Posted by Robert Lopresti at 6:54 AM No comments:

Email ThisBlogThis!Share to TwitterShare to FacebookShare to Pinterest
Labels: 2012, Powell

Out There, by Zoe Beck

"Out There," by Zoe Beck, in Ellery Queen's Mystery Magazine, February 2012.

Among the other changes that e-mail has wrought in the world is an improvement in epistolary fiction.  It is possible to exchange letters a lot faster than when DIego de San Pedro wrote the first epistolary novel in the fifteenth century.

And that's what German author Zoe Beck presents with, a story written entirely in e-mails.  Most of them are written by Gil Peters, who is a successful author despite having agoraphobia so fierce that she hasn't left her apartment in eight years.  But that's okay, she has adjusted to it, and with her computer and her shrink on tap she is doing fine.

Then her doctor goes on vacation just when an unacceptable change happens to her home.  Things start to go rapidly out of hand...

The only thing I love better than a twist ending is multiple twists, and Beck provides them.  I thought I knew where the story was going.  Then I thought I saw the new direction.  Nope.  No wonder it won the Glauser prize.
Posted by Robert Lopresti at 6:44 AM No comments:

Posted by Robert Lopresti at 7:26 PM No comments:

My friend James goes from strength to strength, as the saying goes.  This novelette is the best Sherlock Holmes pastiche I have read since Nicholas Meyer turned the field on its ear with The Seven Percent Solution.

James explains in an introductory note that the idea came when he read that during the nineteenth century the British intelligence service used doctors as spies in Asia.  Of course, Dr. Watson was an army doctor in Afghanistan.  And who was the head of British intelligence?  Sherlock Holmes's brother Mycroft.  If Watson was one of Mycroft's spies, than surely it was no coincidence that he wound up in a position to keep an eye on his boss's eccentric brother...

Wait a minute, the purists cry.  Watson could never have been a spy!  He was too innocent, too open,  and not nearly observant enough.

But Watson could never have fooled Holmes!  Holmes was far too shrewd, too perceptive, and we know that from the books and stor-  Hmm....

You may think I'm giving away the plot.  Actually this is just the premise.  All I will tell you about the actual plot is that it is told by two minor characters in the canon, and it retools some of the Holmes saga, while solving some of the great puzzles of the works (like Watson's famous wandering wound, for instance.)

And the writing sparkles.  Here is one of the narrators: "I had known Lucky Jim Moriarty in India.  We shared a common interest in embezzling from our regiments."

A treat from beginning to end, with some genuine shocks along the way.
Posted by Robert Lopresti at 6:31 AM No comments: 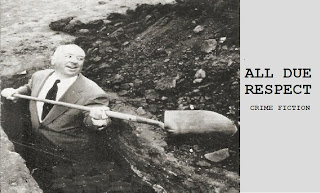 Great photo there...  I wonder why I have never seen it on the cover of Alfred Hitchcock's Mystery Magazine?  Okay, back to our point.

Janice and I were just getting into bed when I remembered I still had Lenny’s body in my trunk. You’d think you wouldn’t forget something like that, but it had been a long day.

So begins our story.  We can guess that Tommy is not the sharpest shooter on the target range, so to speak, and this is proven out.   He works for his uncle, a mobster, the man who ordered him to arrange a burial for the late Lenny.

Alas, Tommy keeps making bad choices, like burying poor Lenny in his yard, right next to the property of a deputy...

Posted by Robert Lopresti at 8:26 AM No comments:

Email ThisBlogThis!Share to TwitterShare to FacebookShare to Pinterest
Labels: 2012., All Due Respect, Kenyon

I just listed what I consider to be the best 15 stories of the year, over at SleuthSayers.
Posted by Robert Lopresti at 7:02 AM No comments:

The Hedgehog, by Ferdinand von Schirach

"The Hedgehog" by Ferdinand von Schirach, in Crime: Stories, Alfred A. Knopf.

Something very different this week.  Von Schirach is a defense attorney in Germany and these stories are apparently based on true cases, to what degree one can't tell.  The Library of Congress Cataloging in Print says "Fiction," and who am I to argue?  Another odd thing is that all the stories begin with what seems to be a third-person omniscient narration, but at some point a first person speaker arrives, an anonymous defense attorney, whom I assume is supposed to be von Schirach.

The writing style is flat, deliberately plain (or so the translation makes it appear). But now, let's go on to "The Hedgehog."

Once upon a time there were several brothers, all of whom thought they were smart and strong. They all thought the youngest was a fool and a good-for-nothing.  But when an emergency occurred it turned out that the despised youngest brother was the cleverest of them all...

Does that sound familiar?  It should; it is the plot of countless fairy tales.  Von Schirach gives us a modern take in the story of  Karim Abu Fataris.  He is the youngest of nine brothers from Lebanon, part of an extended family of criminals.

When Karim started school, the teachers groaned -- "Yet another Abu Fataris" -- and then treated him like an idiot.  He was made to sit in the back row, and his first-grade teacher told him, at age six, that he wasn't to draw attention to himself, get into fights, or talk at all.

Karim is no idiot but he is willing to let the world, brothers included, think so.  By age ten he is deliberately get C- grades while teaching himself calculus with a stolen textbook.  By the time he leaves school he has an apartment of his own, a girlfriend, and an illegal business, all of them unknown to his family.

But when his favorite brother goes on trial for robbery Karim pits himself against the German legal system.  Who wins?  Well, it can be a great advantage to be underestimated by your enemy...

By the way, "Self-Defense," in this same book, came in a close second this week.
Posted by Robert Lopresti at 7:06 AM No comments: