My story "Brutal" is in the Current (September) issue of Hitchcock's.  You can read about it at SleuthSayers.

Posted by Robert Lopresti at 12:01 PM No comments:

Losing It, by Melodie Johnson Howe

To be honest, I am not a great fan of the subgenre of stories about mousy women being abused, physically or emotionally, by bullying men.  Just not my cup of tea.

But my friend Melodie made me a believer in this one, largely because the story is so twisty it makes a corkscrew look like a knitting needle.

Callie Taylor is the mouse in question, a manicurist.  Mike is the boyfriend, supposedly working on a screenplay, but apparently only working on the groceries Callie brings home on her paycheck.

One night Callie rebels against her life by spending a thousand dollars she can't afford on a shawl.  Mike hates it because it keeps her from looking "normal," the ordinary person he wants her to be.

And then, late one night in a bar, she loses the shawl.  And worse, one of her wealthy customers shows up wearing the shawl - complete with the tears Mike's dog put in it.  How can Callie get it back without losing her job?

That's where I have to stop, so as not to reveal any twists.  Let's just say, whatever you think is going to happen, you're wrong.

But you'll have a very good time being wrong.
Posted by Robert Lopresti at 5:25 AM 1 comment:

The Street Ends At The Cemetery, by Clark Howard

"The Street Ends At The Cemetery," by Clark Howard, in Ellery Queen's Mystery Magazine, August 2012.

I am surprised EQMM didn't use their Black Mask category for this story.  It has all the meaness and violence you could ask for in such a tale.

In classic noir fashion Cory Evans's life is changed forever by an encounter with a woman, although she is not exactly a femme fatale.  Cory is a corrections officer and Billie Sue is the girlfriend of a prisoner.  When Cory sees her standing in the rain outside the prison, waiting for a bus that won't come for an hour, he violates the fraternization rule by giving her a ride.

There's no conspiracy going on here.  Cory wasn't trying to seduce her.  Billie Sue wasn't looking for a guard to cuddle up to.  But things go to hell all the same.  You can say Cory is an innocent victim of circumstance, but as Rex Stout said "No man was ever taken to hell by a woman unless he already had a ticket in his pocket or at least had been fooling around with timetables."

The intriguing thing in this piece is that every character, including the alleged law-enforcers, has a dirty trick up their sleeve, a double-cross in their heart, and a gun or two in their pockets.  Does it end happily?  Look at the title.  What do you think?
Posted by Robert Lopresti at 9:44 AM 3 comments: 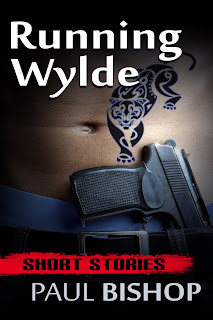 This story was originally published in Murder Most Celtic, edited by Martin H. Greenberg, in 2001.  I caught up with it in Bishop's e-collection of stories.


Meet Decco, an Irish fella with a bad attitude...

You might think I'm stupid.  I ain't.  I done loads of them Open university courses on the telly.  I ain't stupid. i just ain't like you, and i don't want to be.

I hate effin squares like you - sitting there on your arse reading books.  you're boring.  i hate boring.  Get up, get out, smash somebody's face in.  that's what it's all about - a little aggro makes the world go round.

As the story opens a couple of thugs are attempting to round up Decco for a little meeting of the minds with a crime boss named Mandrake.  Mandrake's daughter has gone missing and he decided Decco is just the lad to get her back.  Before our hero can get started a tough female cop scoops him up.  She also wants him to find the daughter, but with a different goal.  Then there is a rival gang of bad guys with their own plans...

Good story with an action-packed ending.

A couple of notes.  I am no expert on how the Irish speak - the works of Roddy Doyle and Ken Bruen constitute my main first-hand experience - but there is a slight touch of the begorrah-it's-a-leprechan to Decco's prose stylings, as far as I am concerned.  Didn't spoil it for me.

More problematic is the e-book itself.  There are many styles of e-book production but this may be the sorriest I've run across.  No page numbers, no table of contents, no way to get from the beginning to a particular story except by hitting the screen over and over and over....

Posted by Robert Lopresti at 10:13 AM No comments:

The Case of the Pink Lady, by Casper Bogart

"The Case of the Pink Lady," by Casper Bogart, via Amazon.

"Audacity, more audacity, always audacity," so said Georges Jacques Danton.  It is a good motto for writers.  I love fiction that drops your jaw and makes you say, "can you do that?"

The pseudonymous Mr. Bogart succeeded in being audacious with this e-tale.  It features as its protagonist-detective none other than Dick Nixon.  This takes place in 1late 962, one of the lowest points of Tricky's career.  After losing the presidency by a hair's breath (and arguably by fraud) he loses a race for governorship in California.  As the story begins he makes his famous announcement that the press won't have Dick Nixon to kick around anymore.


A day later he gets a panicked phone call from his campaign manager: there is a dead woman in a convertible in the manager's driveway and the cops want to know what happened.  Nixon volunteers to act as the man's attorney and quickly discovers (with a little help from his buddy J. Edgar Hoover) that the dead woman is connected to both him and some high-up Democrats.  Dirty tricks abound.


The story is about as believable as Grimm's Fairy Tales (my problem is not the political shenanigans, but Nixon's brilliant detectivizing), but it has an interesting viewpoint on Nixon's character and some wonderful flashes of wit.


The phone rang.
"Yeah."
A female operator.  "Long distance from Washington, D.C."
Nixon snorted.  "You bet it is."

Posted by Robert Lopresti at 6:39 AM No comments: