"More Than Suspicion," by Joseph S. Walker, in A Hint of Hitchcock, edited by Cameron Trost, Black Beacon Books, 2022. 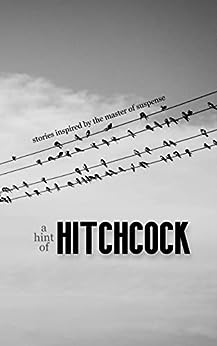 First of all: great cover.

This is the  sixth story I have reviewed by Walker, and the second this year.

The place is a small town in Colorado.  The time is just after Pearl Harbor.

Hannah is the projectionist in the town's movie theatre.  She is also the de facto manager since her boss ran off and enlisted.

Supply chain issues leave her running Hitchcock's classic movie Suspicion over and over.  You would not expect it to maintain much of an audience, but one newcomer returns to view it almost every night.

Darlene's obsession is based on her dislike of the film's ending, in which the husband turns out to be innocent and the wife merely imaging the danger she is in.  "The end is the only part that's a lie.  A pretty lie, but still.  He kills her.  Of course he kills her."

Clearly Darlene has a secret.  It turns out Hannah has one as well - beautifully foreshadowed - and it is one she would love to reveal to Darlene, if she could gather the nerve.

You won't be surprised that Darlene's past comes calling and the two women have to work together if they want to survive into the future.  A terrific story.

The Other French Detective, by O'Neil De Noux My friend and fellow Sleuthsayer, O'Neil De Noux, has series characters at work in different periods of New Orleans history.  Sometimes they will investigate crimes in the same building, a century apart.

In this clever story it is 1877 and police detective Jacques Dugas is in demand because he is one of the few officers in the mostly-Irish force who speaks French.  Galjour, a police inspector from Paris, has just arrived.  He speaks no English but he is seeking a French prostitute who killed the wife of a government official and is believed to have escaped to Louisiana.

Dugas helps the French cop search the city's brothels but things get more complicated the next day when another Frenchman arrives, also claiming to be Inspector Galjour.  Of course, this is long before the days of photo I.D.s and instant indetity checks via the Internet.  And then it turns out that the woman both men are after may be a victim rather than a killer...

A twisty story I enjoyed a lot.

A Rat Tale, by Mark Thielman

Mark Thielman, my fellow SleuthSayer, is having a good year  This is his third appearance on my list in 2022 and his ninth overall, which I believe has him tied at the top.  It is also the second story in this series to make my best-of-the-week list.

Bernard de Vallenchin is a sixteenth century French attorney with an odd specialty.  Medieval law allowed animals to be tried for their alleged crimes.In this case the farmers of a region are demanding that rats be punished for ravishing their crops.  Our advocate faces penalties if he can't find an adequate defense.

What follows is what they refer to in TV legal dramas as "winning on a technicality," as de Vallenchin embraces the skewed logic that says rodents can be taken to court.  A very funny story, based on an actual case.

Posted by Robert Lopresti at 8:09 PM No comments:

Paying the Ferryman, by E.J. Wagner

I have said before that my favorite short stories tend to have at least one of these characteristics: great characters, a twist ending, a great concept, or heightened language.

By heightened language I mean that the words do more than get you from the title to the last page.  In effect, they express a world view. This could be  style as flat as Hemingway or as Baroque as Faulkner.

Which brings us to the opening of Wagner's story.

He tells Judith that he loves her.

They face each other across the butcher'-block counter, the one made fifteen years ago in the first months of their marriage.  She slices sweet peppers for their dinner -- the peppers are bright green, red, and yellow, and she loves the look of them as she slides them into a big white bowl...

He tells her that he truly loves her, and has since they met, but that he -- and here he smiles sadly -- he has fallen deeply, desperately, passionately in live with Hadassah Sharon, the Israeli graduate student he is mentoring, and that he simply can't control his feelings because they're overwhelming.  It is bashert -- predestined.

I skipped a few paragraphs but this gives you some idea of what Wagner is doing.  The rich detail.  The oblivious egotism of the husband.

Imagine if this story in the more customary style: past tense, with the husband's words in quotation marks.  Some of the magic vanishes.  The story becomes ordinary.

The rest of the story tells how Judith responds to hubby's announcement.  It is a neat tale, neatly told.

You may wonder why a story in Jewish Noir II has a title referring to Greek mythology.  Well, there are at least two links, as you will see if you read it.  And I hope you do.