Hit and Run, by Doug Allyn

This is the fifth appearance here by Allyn. It is also the second week in a row that I chose a short story by authors known for much longer tales.

Imagine you are stuck in traffic on your way to an important, even life-and-death meeting.  Not good.

Now imagine you get rear-ended by a woman who is not paying attention.  Even worse.

But the frosting on the cake is that the accident makes your trunk fly open, revealing the bag of cocaine you are bringing to the meeting...

What follows is more twists and turns per page than any story I can remember in years.  Quite a ride.

Posted by Robert Lopresti at 11:21 AM No comments:

This is the ninth appearance in this space by DuBois, tying him with Michael Bracken.  Other than high quality, it doesn't have much in common with his other stories here, which tended to be long tales of good guys overcoming bad guys. "Killers," on the other hand, is a short and quirky tale about somewhat eccentric baddies.

Palmer and York are ex-cops, turned to a more profitable career as hitmen.  They are sitting in a car one night, waiting for a couple who they have been assigned to attend to.  Alas, the targets are late and the old friends run out of things to talk about.  And so, to keep awake, Palmer says: "Tell me the most romantic thing you've ever done."

Well.  That's a surprising turn.  What follows are a couple of revealing anecdotes from the killers' past.  And in the last scene we see how they are affected by these memories.

I thought I knew where this charming story was headed.  DuBois fooled me completely.

Posted by Robert Lopresti at 3:38 PM No comments:

The Trouble with Rebecca, by Larry Light 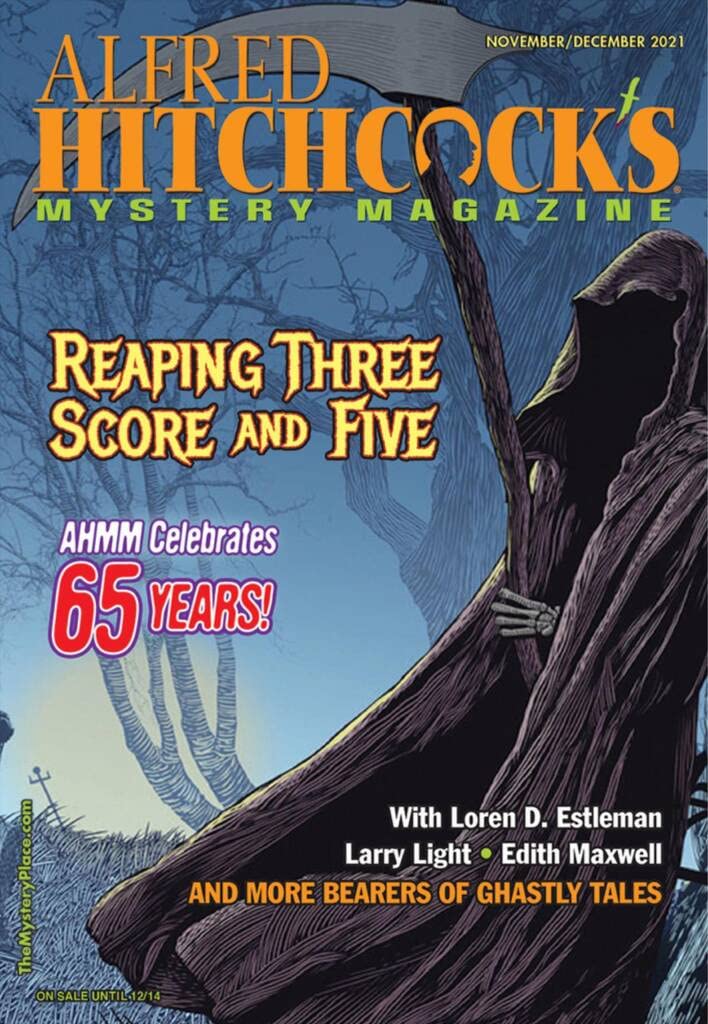 "The Trouble with Rebecca," by Larry Light, in Alfred Htichcock's Mystery Magazine, November/December 2021.

Generally a piece of fiction has a premise (woman comes to private detectives seeking protection; one of them is promptly killed) and a plot (see, there's this statue of a bird rom Malta, and some very bad guys want it...).

And also generally, a reviewer can discuss the premise but shouldn't give away too much of the plot.  This becomes a problem if the story is halfway over before the premise is clear.  So I will be revealing a lot of the set-up because, what else can I do?  Discuss the punctuation?

Max is a "tech geek," working for a company that does hush-hush security stuff.  Because he hates the social side of work he invents Rebecca, a non-existent wife.  This imaginary person is his excuse to avoid after-work events and the like.

All goes well until he falls in love with a flesh-and-blood co-worker.  His tightly zipped employer does not approve of infidelity.  Leaving Max with a thorny dilemma:

How do you rid yourself of a wife who does not actually exist?

This story is a real treat.

Posted by Robert Lopresti at 7:56 PM No comments:

Back Down to Black, by Andrew Welsh-Huggins

"Back Down to Black," by Andrew Welsh-Huggins, in Mystery Magazine, November 2021.

This is the fourth appearance here by Welsh-Huggins,and I think it is the second appearance by protagonist Mercury Carter.  It's hard to tell because the hero of "The Mailman" is nameless, as far as I can tell.  They certainly seem to be the same guy.

So who is that guy?  He's a delivery man, the person you contact when the package absolutely, positively needs to be there on time - and bad guys are ready to kill to prevent that.  In the first story the package was two people.  Today it is a flash drive full of potentially life-saving data needed by a virologist.

Here is Carter reacting to someone putting a gun against the back of his head and telling him "Don't do anything stupid."

'Sure,' said Carter, and did something stupid, driving his left elbow back into the man's chest.  Carter was hardly big enough to do any kind of damage with such a move, which almost any schoolboy could manage better, but it startled No. 4 and the gun barrel slipped off Carter's neck momentarily and he turned and broke the man's nose with his left palm, rocketing his hand forward like a power to the people salute gone terribly wrong.

Actually the character reminds me less of Perry's heroes than of Richard Stark's Parker, although Carter appears to be a good guy.  A most enjoyable story.

Posted by Robert Lopresti at 9:30 AM No comments:

The writing advice for decades has been: Start as far along in the action as you can.  If backstory is necessary, you can fill it in after drawing the reader into the story.  One result  of that is that a lot of the time the mystery is not "Who done it?" but "What was done?"

Jodie is getting on a bus late at night and she wants to be left alone. Unfortunately the last seat open is next to a chipper old lady who is eager to chat.  Her name is Barbara and she is observant, too observant for Jodie's liking because Jodie has a secret to keep.  And that secret - what was done? - will keep you turning pages.

Just like last week (and from the same book) it is the last sentence that made this story my favorite.  Very clever tale.