A New Pair of Pants

The last time I talked about a series character it was James Powell’s Inspector Bozo, and that piece led Jim to write this excellent piece on how story series develop, so don’t say I never do any good for the world.

Have you noticed that some of the series character who are the most enjoyable to read about (or watch) are people you would NOT want to spend time with in real life? Seriously, how long do you think you could tolerate the presence of Sherlock Holmes, Nero Wolfe, Columbo, Rumpole, or Dr. House?

Part of their attraction is they don’t obey the rules of society, getting away with stuff our superegos would never permit. One of the reasons Shanks is my favorite among the characters I have created is because he does things I am far too well-behaved to try.

Which brings us to Jas. R. Petrin’s Leo “Skig” Skorzeny. Skig is an aging Halifax loan shark, a quintessential tough guy with a heart of – well, granite mostly, but there is a thin streak of gold running through it somewhere. Skig also has an “imp” in his gut (I think it was defined as stomach cancer in an earlier story) which keeps him popping pills and even crankier than he would other be.

And he has reasons to be cranky. Two of his clients – a cop and a school administrator – can’t pay their debts, and when one of them is suspected of murder it looks like Skig may have to write off the debt. Meanwhile one of the few people he likes, an old woman, is in danger of making a bad business deal, and Skig won’t allow that. And while tough guys can be scary, it’s good to have one on your side.
Posted by Robert Lopresti at 12:44 PM No comments:

Tools of the Trade

"Tools of the Trade" by Tom Robinson, in Needle, issue 1, number 2. 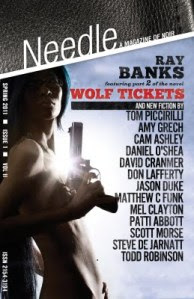 At Sandra Seamans' indispensable website My Little Corner I recently learned about a new print publication called Needle, a " magazine of noir."

Here's what I don't get. Apparently this is not a paying market. So how do they acquire such professional-quality stories? My first theory is that the publishers have a vast research department digging up blackmail evidence for noir writers. My second theory is still being formed.

The stories adhere more strictly to the classic noir formula (a nobody tries to be somebody and gets shafted) than, say, the Akashic noir city anthologies I have read.

For example, Todd Robinson's "Tools of the Trade." The nobody in this case is a card cheat and the way he tries to rise above himself is by playing in a game where he can't cheat. Inevitably, things don't turn out the way he hoped.

The story is told cleverly in a series of flashbacks and fragmented scenes. Eventually you find out what happened and precisely what hole he has dug himself into. And as with most of the stories in Needle, the quality of the writing and language is very high.

Gamblers are like thieves. Real poker players take money that isn't ours and we do it through lies and deception. Every poker face is either a lie or hiding a lie. Like thieves, we're always looking for the great score. The one big haul that will set up up with the house in Cabo and the fleet of Cadillacs.

But that's a lie too.
Posted by Robert Lopresti at 5:37 PM No comments:

"The Sadowsky Manifesto," by Karen Catalona, in Mystery Writers of America Presents The Rich and the Dead, edited by Nelson DeMille.

I bought an iPad a few months ago. Mostly I have been using it to check my RSS feeds (see the right column of this screen) for which it seems to work better than my desktop. But it's called an eBook reader, so I had to get around to buying a book, and I have done so. (I hasten to add that I bought it through the website of my local bookstore, thereby contributing to the people who sponsor authors' readings in my town. That's how you buy eBooks, right?)

The MWA anthologies are always themed. The editor invites certain authors to submit; the rest of the slots are available for any MWA member to shoot for. I think I have submitted three times and made it in once.

This year the editor is Nelson DeMille and the theme is the very rich. So far, my favorite story barely qualifies on the theme. But that's okay. It's good anyway.

Max Bergen runs a not-too-successful literary agency. One day a pot of gold rolls in over the transom. More literally it is a manuscript from the serial-killer-du-jour, who had just killed himself. The FBI and publishers are clamoring for the book and Bergen stands to make a fortune on commissions.

Of course, there has to be a problem, right? Sadowsky's book is not an angry political rant. It's a science fiction novel, and it's so bad that after fifty pages readers will be rooting for the giant robots to kill the hero. The book is a disaster and there is no ethical way for an agent to make money off it.

But, hey, Bergen is a literary agent. Who said anything about ethics?
I have never heard of Karen Catalona before, but I hope to run into her again.
Posted by Robert Lopresti at 12:27 PM No comments:

Email ThisBlogThis!Share to TwitterShare to FacebookShare to Pinterest
Labels: 2011, Catalona, Rich and the Dead

“The Diner” by Sean May. In Crime Factory. Issue 6.

This is the second time my pick of the week is a free-online choice, this time in the zine Crime Factory.

Once again we are back to bad guy meets bad guy, a format I complained about recently. What makes this story a treat is that the narrator is an experienced heist artist critiquing a young punk who is robbing the diner where our hero happens to be having a late dinner.

Yeah, shades of Pulp Fiction, but there are only so many plots in the world and the question is what you do with the plot. May has fun with this one.

I always like to make a good impression on the people I’m holding up, so I always wear a suit whenever I do a job. Nobody expects that the guy in the suit and sunglasses is going to pull a gun on you until you’re looking straight down the barrel of the thing and you’ve got nowhere to go.

And speaking of nowhere to go, this story could have gone in a dozen different directions, so I was kept in suspense wondering which choice the protagonist would make. A lot of fun.
Posted by Robert Lopresti at 11:17 AM No comments: