The Stain of Memory, by Thomas K. Carpenter

This is the second appearance in this column by Carpenter and his Roman detective.

Carpenter's Ovid is not the great poet, but a magistrate serving in a poor neighborhood of Alexandria.  He is a long ways from a conventional hero, modern or Roman, being overweight and somewhat dithering.  But he is clever, and honest, and has an excellent grasp of Roman law, which is vital because these stories tend to turn on quirks of this legal system.

As usual, Ovid finds himself between a rock and a hard place.  To be specific, his boss, who is in charge all the magistrates and the military in the city, has brought a charge against the governor.  Both of them demand that Ovid, as presiding magistrate, rule in their favor.  Either can destroy him at will.

As I said, Ovid has been in tough spots before, but this time he learns something that makes the problem very personal.  So, in effect, he is his own client.

A very clever story, and an excellent portrayal of the time period.

Posted by Robert Lopresti at 8:57 PM No comments:

Email ThisBlogThis!Share to TwitterShare to FacebookShare to Pinterest
Labels: Carpenter "Perfect Strangers," by Tilia Klebenov Jacobs, in When A Stranger Comes To Town, edited by Michael Koryta, Hanover Square Press, 2021.

Gershom is finishing his second prison term for armed robbery when his cellmate Dougal points out the new gold mine: marijuana dispensaries.  Cash-rich and security-poor, they are a robber's dream.  So when he gets out Gershom begins to plan an elaborate robbery, because he does not intend to go down a third time...

The writing here is very witty. "Five years [in prison] went by like a snail with a hangover."  "If this went sideways, they'd lock me up and melt down the warden." And so on.

If you have read a few hundred stories like this you know something will go sideways,  But Jacobs found a clever and unexpected way to do that.

Posted by Robert Lopresti at 7:00 PM No comments:

Email ThisBlogThis!Share to TwitterShare to FacebookShare to Pinterest
Labels: Jacobs 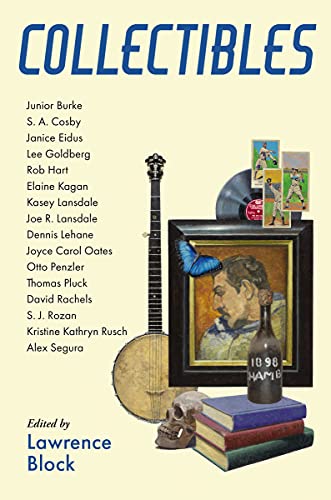 This is Lansdale's third appearance here.

If a story is told in first person, style is character.  Here is our heroine describing her boss, a fence, dealing with a dissatisfied customer:

"He was a tough old guy, Ruby said.  Big, cold crack walnuts with harsh language, chase a squirrel up a tree with bad breath. She had to use an axe handle to sort the guy out a little.  It wasn't too bad.  He was able to leave on his own, though not without a certain amount of pain and difficulty..."

That tells you a lot about Ruby, sure, but we also find out a lot about the narrator, especially that "It wasn't too bad." What does she consider a real problem?

Ruby has been hired by a Texas bigwig to steal a skull form a cemetery  -- I'll leave the reason for that a secret -- and she ropes our heroine in.  Things get worse.  Then they get worse.  And... you get the idea.

Here is the assistant fence describing the hasty exit made by two thugs: "Bridge Support and his Kemosabe left out of there so fast they didn't even leave body odor."

Posted by Robert Lopresti at 6:00 PM No comments:

Yelena Tried to Kill Me, by Trey Dowell

"Yelena Tried to Kill Me," by Trey Dowell, in Mystery Weekly Magazine, August 2021.

"The first time I saw Yelena Nevsky, she tried to kill me."

Well, that opening line got my attention.  Our hero participates in armored duels at a renaissance fair.  Yelena, dressed in Russian medieval chain mail, battles him for the championship.  I won't tell you who wins, but the result is a romance.

The protagonist's friend isn't buying it.  Why would a sexy Russian fall for a nothing like him?  And as a Russian cultural attache she must be a spy, right?  "And she's, what, stealing all the classified info I keep in my corner coffee shop?"

Maybe not, but something must be going on or this wouldn't be in a mystery magazine.  The story has some clever twists.

This is the eighth appearance in this column by Richard Helms, and his third in 2021.  Somebody's having a good year.

That's the opening sentence.  The narrator is a homeless guy, an ex-cop.  An ex-dirty cop, he would be quick to add.

Sonny, a homeless guy with mental problems, has gone missing. Worse, a national political convention is coming to town, which means it is Sweeps Week.  That doesn't refer to the time when the TV networks put out their best, but the time when the city kicks out its worst - or at least most unpleasant-to-look-at.

So our hero is trying to figure out what happened to Sonny.  One of the places  he looks is, well: "Hospital ER waiting rooms are like resort spas for homeless guys.  You get AC, free TV - even if they always seem to be tuned to the Disney channel -  and a place to sit unmolested as long as you don't draw attention to yourself."

Posted by Robert Lopresti at 10:11 AM No comments: