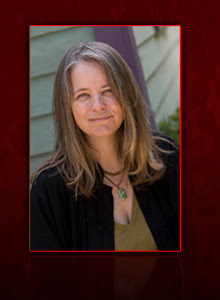 Some stories grab you from the git-go.  I love thinking "ok, a place on the best-of list is yours to lose."  On the other hand, some stories seem just adequate, good enough to keep reading, and then sock you with a great ending.  Brackmann's first published story is one of the latter.

Kari has a problem.  Her life is divided into Before and After and what came between those two was a car accident that changed her life, destroyed parts of her memory, and altered her personality.  She's adjusting to her new self, taking care of animals as wounded as she is, and sleeping with two men, one from each half of her life.  Eventually Kari discovers that someone is plotting against her, and, well, "She wasn't what she used to be, but she wasn't stupid..."  So, watch out.

Once the twists start coming Brackmann keeps them pounding up the beach at you, right to the last perfect sentence, which made me laugh out loud.
Posted by Robert Lopresti at 7:30 AM 1 comment:

The noir city books by Akashic Books are always a mixture of true noir stories and stories that have some but not all elements of the genre.  (The best tales can fall into either category, by the way.)

Mr Mariotte has provided a classic noir tale.  The narrator, Mike Rogers, is a security guard in the swanky Soledad Mountain neighborhood of San Diego.  One night he gets called out to a possible intruder incident and meets a wealthy man with a beautiful young wife.  This being noir you can pretty much guess where things will go.  But Mariotte has some nice surprises for us (and some unpleasant ones for Rogers, of course.)  One thing I like is that he follows the trail of conspiracy to its logical conclusion: how can you trust someone with whom you have shared a betrayal?
Posted by Robert Lopresti at 9:42 AM No comments:

This is just a neat little piece of work. I love how it unfolds one piece at a time, and the gruff writing style that fits nicely with the character.

Jones is fitting into retirement. Bought his condo in Elmwood Village, voted a couple yers ago one of the country's ten best neighborhoods. Second story, corner unit, overlooking Bidwell Parkway...

So it begins. At first we don't learn much about Jones, just about the young cleaning woman he hires and makes friends with. Then we are introduced to her boyfriend.

And then trouble erupts in the life of the young couple and Jones shows his true colors. We meet a few new characters, finely drawn bad guys who cherish the use of the right word and the right action even while they are doing objectively wrong things. As I wrote in this space a few months, it can be good to have a tough guy on your side, even he is allegedly retired.

Posted by Robert Lopresti at 4:12 AM No comments:

You may well accuse me of piling on the bandwagon, since my friend James yesterday won the Black Orchid Novella Award.  But, as ever, I calls 'em as I reads 'em, and this week, the best of the bunch was a historical novella by Mr. Warren.

He has written a number of stories about Alan Treviscoe, an investigator for Lloyd's in late 18th century London.  In this case Treviscoe is asked by a lady he met in an earlier tale to look into the death of her betrothed.  This is no ordinary death, because the victim was found, burned and crushed, in the middle of Stonehenge, on the same night that mysterious lights were seen in the sky.

Since in addition he was the founder of a scientific group called the Luciferian Society, the suspicious naturally see a demonic element in the death. Treviscoe, as you can imagine finds a natural solution to the crime, but as he notes, "in my experience, murder is always the work of the Devil."

One of the trickiest bits about writing historical fiction is making the language sound right.  The difficulty of this is sort of a bell curve, I think.  It gets harder as you go back into the nineties, the eighties, etc. and probably hits a peek of trouble when you hit Shakespeare's time.  After that I think it is less difficult simply because readers understand that you can't be expected to write Chaucer's English, or for that matter, Caesar's Latin, because we wouldn't be able to understand it.

My point is that Warren has the task of sounding appropriately eighteenth century, while still being comprehensible.  He succeeds well, I think, not drowning us in jargon, but capturing the atmosphere nicely.  And so we have references to Treviscoe "making his leg," the meaning of which the reader can deduce from the context.  Or the nicely antiquated dialog: "What's this, sir?  I to remain in London, whilst you place yorself in danger?  In the company of a stranger, yet?  It will not do."  The letter written by the villain is a particularly choice and delightful example, revealing personality as well as grammar.

In that regard I can't resist noting that Treviscoe observes that the bad guy "lies like a French lover."  What a treat..
Posted by Robert Lopresti at 10:40 AM 1 comment: