His Daughter's Island, by Brendan DuBois

Very nice piece opens the new issue of EQMM.  Zach Ford is a mild-mannered accountant in a small town in Maine.  His beloved daughter goes off to a party at the home of a millionaire and dies.  The millionaire's son is whisked out of the country, far from the possibility of justice.

In some stories the next step would be a whole lot of guns and blood, but Mr. Ford has a different idea.  He studies up on the millionaire, and then he studies the state and local ordinances.  And starts plotting a completely legal vengeance.

DuBois' story reminds me of one of my all-time favorites, "Privilege," by Frederick Forsyth.  Both are about a "little man" who uses lateral thinking to go after a foe who seems to powerful to attack.  Good piece.
Posted by Robert Lopresti at 8:46 AM No comments:

After I read this story I asked my friend David if there was a crime in it.  He replied: "there is no crime in 'Jenny's Ghost'; only consequences."   But, he noted, there is a mystery.  Having thought about it, I decided there is a crime, of sorts. I'd be interested to know what you thought.

David wrote about the genesis of this story last month at SleuthSayers, but even if he hadn't I would have suspected it started with the location.

Picture the setting: you are in an airport, stuck in that endless half-life between flights and suddenly you spot something that can't possibly be there: a woman who died a decade before.  Hell of a set-up, isn't it?

David noted that this is a story about consequences.  Not surprisingly it is also about guilt, and the chance of redemption.  These are subjects for fiction I am very much drawn to.  (Hey, my CD is called Can I Blame You?)  David's stories often have a strong spiritual component.  (One of his recurring characters is a priest.)  As I said, there is a possibility of redemption at the end of this story.  Airports can seem like hell, but you don't have to stay in one forever.

Posted by Robert Lopresti at 8:32 AM No comments:

One Soul At A Time, by Dana Cameron

"One Soul At A Time," by Dana Cameron, in Ellery Queen's Mystery Magazine, June 2012.

The latest issue of EQMM gets off to a bang with this story by Dana Cameron.  The narrator is a woman who has recently changed names and started a new life.  We find out a little bit about why she made this switch, and can guess more.  She has had, shall we say, an interesting career.

The story begins with her receiving the obituary of her mentor, a former college professor who changed her life forever.  She spots a clue in the obituary that the death was not the accident the authorities claimed and goes rushing off to Maine to discover the truth.  This turns out to involve some very bad locals with even worse allies.  Our nameless character reluctantly finds herself getting deeper and deeper into the mess, first to pay the debt to her mentor and then, when that is done, for "extra credit, bonus points."

The wise heads tell me that suspense stories are personal and thrillers are global.  The world is in danger!  But to my mind a suspense story is about what we might call a civilian in danger, while a thriller is about a pro.  This story is a thriller, and a very good one.
Posted by Robert Lopresti at 10:42 AM 2 comments:

Teed Off, by Mark Troy 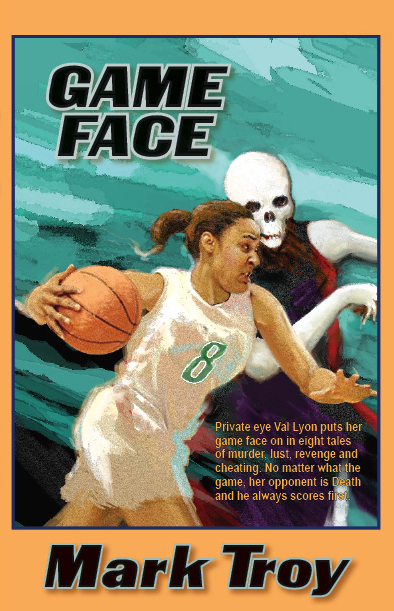 This ebook was available for free.   It is a collection of stories about Val Lyons, a Hawaii-based private eye.

Glenn Floeck moved down Concourse C of Honolulu International Airport as if he expected everyone to get out of his way.

This first sentence tells us a good deal about Mr. Floeck, doesn't it?  Val has signed on as personal driver for this obnoxious golf millionaire who is actually a lousy golfer and a worse human being.  we will discover she has an ulterior motive for tolerating his crude advances.  She is working on behalf of a client whose sister got a restraining order against Flock, not long before falling of a hotel balcony to her death.  Interesting protagonist, good story.

By the way, it first appeared in Fedora, edited by Michael Bracken.
Posted by Robert Lopresti at 10:22 AM No comments:

A big mazeltov to all!

Best Novelette: "Where Billy Died" by Earl Staggs
Posted by Robert Lopresti at 1:20 PM No comments:

Now that the voting for the Derringer Awards are over I can report that my favorite nominee, among those I didn't read last year, was this novella by an author I have long admired, Toni Kelner.  Apparently this whole book is full of "surreal estate," horror stories related to do-it-yourself.  (This makes good sense.  All of my attempts at home repair have turned into horror stories.)

“Rebound Resurrections,” I said in my best business voice. “How can I help you?”
“Dodie? It’s Shelia Hopkins. Gottfried is dead.”
“Well, yeah.” He’d been dead for a couple of weeks.
“I mean he’s dead again.”
The best fantasy and science fiction tales create a world with its own rules and logic and that's what we have here.  Dodie  Kilburn is a hougan in a reality in which these zombie-creators have their own professional organization and code of ethics.  It turns out you can only bring someone back from the dead if the deceased was obsesses about an uncompleted task.  In the case of Gottfried he wanted to finish retrofitting a house, so that's all well and good.  But someone doesn't want the house finished and is willing to keep killing Gottfried over and over to get his way...

An added treat here is Dodie's conflict with the hougan guild which disapproves of her methods.  Fun story.