I'm not generally a fan of pastiches, by which I mean Author X writing a new story about the characters and in the style of Author Y.  And I say that knowing full well that I made a pastiche my pick of the week last month.  Exceptions happen but they are a hard sell.

I am more positively inclined toward homages, where Author X dives into Author Y's universe and creates something different. Often this involves connecting the fictional world to the one we inhabit.  For example,  Nicholas Meyer more or less started the modern spate of new Sherlock Holmes' tales with The Seven Percent Solution, but he did it by asking: what if Sigmund Freud had analyzed the great detective?

Another example is James Lincoln Warren's clever story "Shakiri," which is based on the fact that army doctors in Afghanistan (like Holmes' friend Watson) were often spies for British Intelligence.

Now let's look at Zebrowski's contribution. It centers not on Holmes but a different character.

John P. Marquand created Mr. Moto in 1935, specifically to fill the gap left when Earl Derr Biggers's death left the world without new Charlie Chan novels.  Moto was a secret agent for Japan.  He appeared in five novels and half a dozen movies before World War II cast Japan in a different light.

In the current story Moto is real and the novels and movies are fiction based on his actual experiences.  And Zebrowski asks: what would have happened to our hero when the Japanese were forced out of their West Coast homes and moved to internment camps?

This isn't a crime story. It's a stretch to call it a spy story.  What it is is a thought experiment and I enjoyed it a lot.

Posted by Robert Lopresti at 5:10 PM No comments:

This is the third appearance on this page by Dana Haynes.

Some stories are all about suspense, building slowly up like a weather system.

The main participants in this situation are Jordan and Lizette Birdsall.  Jordan is a wealth Texas oilman.  The insurance company is sending an expert to examine his collection of rare paintings.

That in itself is not the cause of the suspense.  The paintings are everything they should be. But the inspector's assistant is a beautiful blond woman who looks a lot like Lizette did when she first caught the eye of her now-husband a decade before.  And that makes her very uncomfortable.

Another source of tension is the nasty relationship between the two insurance people. But worse is the tornado watch which quickly turns into a tornado warning. Most of the characters retreat to the storm-proof basement where tensions of all kinds escalate.  Did I mention that Jordan keeps his firearms collection down there?

I did NOT guess where this clever tale was headed.

In the last two years many fiction writers, me included, have had to deal with the knotty issue of Covid.  How do you include it in a story?  You can ignore it, setting the tale in the near past  or (hopefully) near future.  You can include it in passing, with casual references to masks and vaccinations, etc.  Or you can build a story around it.

Blain's is one of the best I have read in the last category.

Henley teaches English at a boarding school.  Because of the pandemic his students are scattered to several continents and he is teaching via zoom with all the messy issues involved in that technology.  But none of those compared to the catastrophic disaster of  the home of his favorite student exploding during a class, taking the entire family with it.

There's more to this than meets the eye, beginning with the fact that the boy's parent's seemed to know something was wrong.  So why didn't they act?  And what was the mother's mysterious profession?  Is it possible the father was somehow involved in building the bomb?

The solution is very satisfactory - and wouldn't have worked before the lockdown.

Murder for Sale, by Hunter Liguore 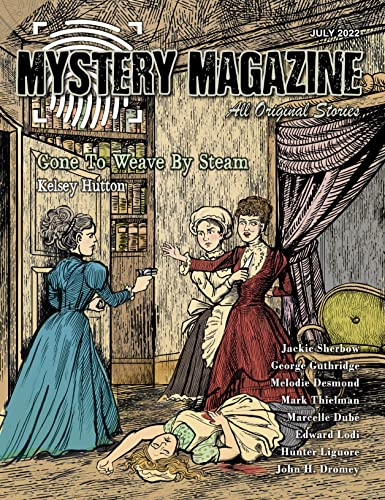 "Murder for Sale," by Hunter Liguore, in
Mystery Magazine, July 2022.

This is a one-joke story in terrible taste.  I liked it a lot.

I'm not being quite fair.  There is a second joke, at the end.  But the story runs along on its one gag most of the way, getting more and more outrageous as it goes along.

This, of course, puts the reviewer in an awkward spot.  Do I reveal the gag or leave it to the reader?  I will err on the side of caution, which doesn't leave me a lot to say.

Here's what I can tell you about the plot: Obert and Alandra have been hunting for their dream home for two years.  Now they have a new real estate agent and she urges them to hustle over because the perfect place has just come on the market.

You may already suspect what happens next.  You may be right.

But what gives this story its perverse charm is the matter-of-fact way all the characters react to the situation, as if it were the most normal thing in the world.  Is Liguore saying we are numb to certain trends in the world?  Have some situations become so desperate that we don't even recognize that the unusual has become usual?

Or is it all just a laugh?

Posted by Robert Lopresti at 6:43 PM No comments:

Fletch Goes For a Ride, by Eric Beetner 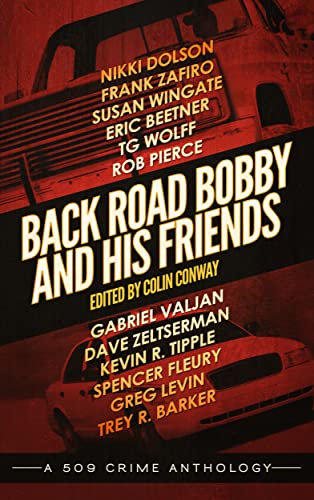 "Fletch Goes For a Ride," by Eric Beetner, in Back Road Bobby and His Friends, edited by Colin Conway, Original Ink Press, 2022.

This is the second appearance in this column by Eric Beetner.

This book is a shared universe anthology.  In this case all the stories are tied together by the same event: legendary getaway driver Handbrake Hardy is dying of kidney failure in Spokane.  Each story includes one of Hardy's friends/enemies/fans reacting to his coming death.

This stories focuses on Fletcher, a man near Hardy's age, and a man in deep trouble.  He owes ten grand to a guy named Ryland and he doesn't have it.  The loan shark sends a punk named Bobby to collect or break some legs.

But our hero has an idea.  See, this famous driver is dying on the other side of the state and he owes Fletcher money.  If Bobby will just drive him over surely Fletcher can convince the old guy to make a death bed donation.

The yarn is a lie, but it gives Fletcher several hours in the car to think of a way out.  Now it's a matter of youth and strength versus age and guile.  Good luck, Bobby!

A clever story with a very satisfactory ending.

Posted by Robert Lopresti at 3:23 PM No comments: