I've been reading the e-anthology,  A Woman's Touch. So far this is my favorite.  Marge and Larry Farley take a vacation in Las Vegas, but Larry isn't much impressed.  First, he loses a bundle in a casino, then he finds the great outdoors "too hot.  And dusty.  Let's go back."   His view changes when  he finds a mysterious box in the sand. When he brings it back to the hotel all hell breaks loose.  Turns out somebody ditched the box in the desert for a reason. Turns out a whole lot of people want it back.  No one is who they seem and Marge, who is a self-help book kind of person, may or may not be able to rescue Larry from the mess he has gotten them into.

Email ThisBlogThis!Share to TwitterShare to FacebookShare to Pinterest
Labels: 2010, Hellmann

Well, it has happened again.  For the second time in fifteen months I haven't read any new stories I liked enough to write about here, so I am going to review one of my all-time favorite stories.

I actually read this one as a teenager in one of those Alfred Hitchcock paperback story collections.  It was my first introduction to Donald E. Westlake, and while I always remembered the story, it was many years before I connected this tale with the author of so many comic crime classics.

In the early sixties Westlake wrote a series of stories about Abe Levine, a New York City cop with one distinguishing feature: he has a heart condition which he quite reasonably fears will kill him.  So each of his cases is colored by this, you might say, existential lens.

Take this story.  Levine and his partner are rushed to a skyscraper where a businessman is threatening to jump off a high ledge.  See the ironic contrast: a young, healthy, successful man who apparently wants to die and Levine, a middle-aged, broke, cop with a heart condition who desperately wants to live.  Can these two guys teach each other anything?

A stunning piece of work and a demonstration of the unusual things that can be done in the name of crime fiction.
Posted by Robert Lopresti at 8:33 AM No comments:

Warren Bull was kind enough to send me a proof of his new e-book.  Most of the stories are historical mysteries, and most are set in either Manhattan, New York, or Manhattan, Kansas.  Quite a difference between those two locations, huh?

Being a contrary sort, I suppose, my favorite is set in Iowa, although it is a sequel to one of the stories set in New York.  Roxie was a showgirl there who fled to Turkey Hill, Iowa with new sweetheart Bob, because her old boyfriend Frank was a mobster who "took advantage of my loving nature and snapped some photos of me loving some well-known people."

By the time this story starts Roxie and Bob have split up and she is astonished to discover an old friend named Bennie trying to rob a bank in Turkey Hill.  He's not very good at it but with her help - who ever heard of a hostage picking up the robber's gun for him? - he manages to escape.

After that she has a somewhat revealing discussion with the sheriff, who turns out to be a bit of a surprise for post-war Iowa, and she solves a crime worse than bank robbery.  A very amusing tale.

I should add that the best idea  for a story in the book was "Heidegger's Cat," but I thought it needed another round of editing.
Posted by Robert Lopresti at 6:37 AM No comments:

Mr. Crockett and the Bear, by Evan Lewis

"Mr. Crockett and the Bear," by Evan Lewis, in Alfred Hitchcock's Mystery Magazine, May 2012.

The annual humor issue at AHMM is very good this year (says the guy with the cover story), including tales by my friends John M. Floyd and R.T. Lawton.  But I have to say the story I admired the most was by Evan Lewis.

Mr. Lewis is one of those unique minds.  I could see him developing into the next Jack Ritchie or James Powell.  He won the MWA Robert L. Fish Award for his first story, "Skylar Hobbs and the Rabbit Man," which was about a guy who thought he was the reincarnation of Sherlock Holmes.

This issue features the story of a direct descendent of Davy Crockett, whose gift/burden is having the legendary frontiersman as a conscience.   Sort of a Jiminy Crockett, sorry.

The modern narrator is a lawyer and he is trying to defend a zoo whose prize black bear is accused of attacking a keeper.  Obviously he needs to consult the bear.  Fortunately his great-greaty-great-grandfather Davy knows how to do a little "bear whispering." The solution, when it comes, is decidedly non-supernatural, I am happy to report.

Sparkling language in the story as well.  I love the report that a couple were "close enough to share the same toothpick."  I hope we will more from the Crocketts, and from Skylar Hobbs as well.
Posted by Robert Lopresti at 6:46 AM 2 comments:

Little Big News: Hitchcock and I, together again 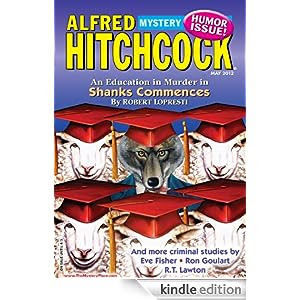 Feast your eyes on the above.  This is the second time I have been on the cover of a magazine, both times on Alfred Hitchcock's Mystery Magazine.  I am happy to report that my brother SleuthSayers bloggers, John Floyd and R.T. Lawton are also in the issue.  Maybe later this year the SleuthSayers can take over a full magazine!
Posted by Robert Lopresti at 10:00 AM 3 comments:

Congrats to all the 2012 Derringer Awards nominees!  Now the members of the Short Mystery Fiction Society (me included) have to read all of these stories and vote....