At SleuthSayers today I list the best short mystery stories of the year.  This is my ninth annual list, and the longest ever.
Posted by Robert Lopresti at 5:18 AM No comments:

Email ThisBlogThis!Share to TwitterShare to FacebookShare to Pinterest
Labels: 2017, best

Thuglit  is dead.  Long live Switchblade.  That was m first thought after reading the first few stories in this magazine.  As far as I know the publishing team of Switchblade has no connection to the late lamented Thuglit, but they share a noir sensibility much truer than the fancypants in the Akashic Press noir cities series.  (For the record,  I have been published by Akashic Press, but not by either of these two magazines.)  I wish Switchblade more success in the market than the old one had.

All right.  Here is how Mr. Beetner introduces his story.

"Daddy," I asked.  "Is that blood?"
Mom waved a hand at me, shooing me out of the bathroom as she pulled the door half closed.  I could still see Dad propping himself up on one hand while the rest of him sprawled out on the tile floor. His free hand stayed pressed hard into the deep red slain on his shirt, down near the hip.

The little boy has just discovered that his family has a secret, and that secret is going to change his life forever.  B eetner shows us very grim, adult, business from the boy's point of view.  Well-written.

Posted by Robert Lopresti at 6:57 PM No comments:

The Spoils, by William Ryan

An old piece of writing advice is that you should not show all your research.  You want it to inform your story without drowning your reader in it.

The same can be true of the fictional background of a story.  The writer may know more than she tells the reader about the characters, the past, etc.  Think of it as the architecture where the story takes place;  it may not get described, but it shapes where the characters can travel.

Ryan's story is intentionally vague on some points, letting the reader fill in the dots.  For example, Amanda works for The Firm, and we don't know exactly what that august company does, except that "I knew enough about The Firm to put Stacy and the other partners in a federal penitentiary for a very long time."

Oh yes, Stacy.  When the story begins Stacy is firing Amanda.  They were rivals, competing for the same chair at The Firm, and Stacy won.  But it is not just a business rivalry.  It becomes clear that Stacy wants to ruin Amanda's life.  Why?  Well, that's vague, too.

And then there's Angela (ugh... why name two important characters Angela and Amanda?).  She is clearly in the Witness Protection Program for reasons that will eventually become clear.

If this all seems terminally vague, all I can say is, it works.  And when Amanda  seeks revenge, there is nothing vague about it.


Posted by Robert Lopresti at 9:50 AM No comments:

Travel is Dangerous, by Ed James 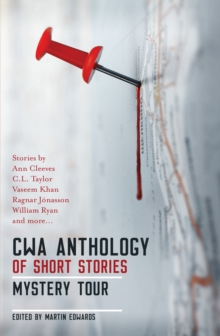 The one thing I don't understand about this story is why Edinburgh detectives would be shipped over to Glasgow in order to investigate a murder.  There's no one closer than an hour away?  Maybe it has something to do with the theme of the book being travel?  All right, moving past that.

Cullen is a DS, detective sergeant in Scotland's capital.  He is reluctantly paired with Bain, who complains that breakfast there is (as Cullen sarcastically summarizes) "nowhere near as good as in Glasgow, home of sectarian violence and divine fry-ups..."

It's a witty story and various kinds of justice are administered before it ends.
Posted by Robert Lopresti at 10:58 AM No comments:

Truth Comes Out of Her Well to Shame Mankind, by Thomas Pluck

“Truth Comes Out of Her Well to Shame Mankind," by Thomas Pluck, in Alive in Shape and Color, edited by Lawrence Block, Pegasus Books, 2017.

This is the second appearance in this blog by my friend and fellow SleuthSayer Thomas Pluck.  And that brings up an interesting point. Most of the stories I have read by him are somewhat raw and visceral. This one is nuanced and sophisticated.  Notice I am not saying that one is better than the other.  Pluck has fit his style to his material, as good writers do.

The narrator is the host of TV shows about archaeology.  He has been invited to a German dig by Emma, a woman he knew in school, who is leading the dig.  But he is not there because of old memories, or his TV show.  He is an expert in the Kurgan civilization, which is known only by the strange burials they left behind.

And there may be Kurgan burials here.  Emma has found some weird stuff, like evidence of cannibalism, and a headless female skeleton in a well.  Very mysterious stuff.

Speaking of mysteries, reasonable people could disagree over whether this is a mystery, i.e., a crime story, or something else.  But if you don't like my decision, start your own damn blog.  And that's about as raw and visceral as I get here.

A Significant Find, by Jeffery Deaver

This is Deaver's third appearance in this column, second one this year.

Each story in the book is inspired by a work of art, which appears in front of it.  In this case it the Cave Paintings of Lascaux, some of the oldest art work in the world.

Sometimes the difference between a good story and a great one is the structure.  I can't imagine this tale working nearly as well without the simple device Deaver uses to introduce it.

It begins with Roger and Della having a crisis of conscience.  They are a married couple, both moderately successful mid-career archaeologists, and they are in France for a conference.

Why the crisis?  Well, let's put it this way.  Suppose Professor A gets a clue to a career-changing discovery but doesn't realize how to use it.  If he tells Professors B and C about it and they are more clever at interpreting the puzzle, are B and C required to share the credit with A?

An ethical dilemma indeed.  And Roger and Della are about to face more dilemmas, but I can't tell you about that without giving away the store.  Or the cave.  Some lovely twists in this one.
Posted by Robert Lopresti at 6:27 PM No comments: