Getting Somewhere, by Susan Isaacs "Getting Somewhere," by Susan Isaacs, in It Occurs to  Me that I Am America, edited by Jonathan Santlofer, Touchstone, 2018.

This is not an anthology of mystery stories.  It is a collection of stories and art of various kinds brought together to benefit the American Civil Liberties Union.

Susan Isaacs has written a lot of novels, including some pretty good crime fiction.  Is this story crime fiction?

Well, yes and no.  Otto Penzler famously described a mystery as a story in which crime or the threat of crime is a major element.  That covers The Murder of Roger Ackroyd and I, The Jury, and Gone Girl, but it also includes The Brothers Karamazov, Macbeth, and Oedipus Rex.  Most people instinctively reject those stories as being crime fiction.  I don't know how to distinguish between those two kinds of stories exactly, but as the Supreme Court famously said about pornography, I know it when I see it.

So, what do  I see here?  The narrator is Karen, wife of a wealthy man, and she explains  her encounter, in 2002, with a boatload of Haitian refugees on the Causeway outside Miami.  What they are doing is a crime, and so is what she does, which makes this a crime story, although it doesn't feel  like one to me.

Which doesn't mean it isn't a good story.  It is.

What makes it special is the narrator's voice which is distinctive, amusing, and fascinating.

I was driving my car, a BMW convertible since that was around the time it became chic to be unpretentious.

Listen, I like Cubans and one of the women in my tennis group, Solana Diaz Ruiz, who for some reason didn't have a hyphen, was a total sweetheart and we had lunch once a week and knew all about each other's kids, and probably too much about our husbands.

[A] gift is a gift.  Either you give with a full heart or you just say screw it and hand over a Saks gift certificate.

Whenever I drove, I made myself listen to NPR.  It paid off.  When I stopped at a traffic light, people int he other cars could think, Intellectual.

Intellectual?  Maybe not so much.  But she finds herself at a crisis point with a chance to make a difference  and she knows that whatever she decides will change a lot of lives, including her own...
Posted by Robert Lopresti at 8:22 PM No comments:

There Are No Elephants in Peru, by Margaret Maron

"There Are No Elephants in Peru," by Margaret Maron, in Ellery Queen's Mystery Magazine, January/February 2018.

Interesting title, no?  Reminds me of the young adult novel by Paula Fox, Blowfish Live In The Sea, with which it has nothing else in common.

This is the second appearance here by MWA Grand Master Margaret Maron.  It is set in North Carolina in 1977.  Dr. Ellen Webster is an archaeologist teaching at a small women's college, and she has been summoned to meet a potential donor who-- Well, let Webster introduce her:

Very, very nice writing, that.  Mrs. Gardner is the last of a wealthy family which has donated extensively to the college.  Now she wants to leave her house as a museum.  Her father and grandfather were hunters and the house is full of stuffed animals.

Dubious historic interest, no doubt, but Grandpa also collected trinkets all over the world on his hunting expeditions.  Trinkets like an Egyptian mummy, and pre-Columbian burial jars from South America.  Ellen gets the summer job of beginning to assess the contents of the collection, although there are obviously years of work ahead for someone.  She makes what might be a historic find, but that's not the problem.

The first problem is Mrs. Gardner's obsessive and eccentric demands.  The second is the return of the father of her three-year-old daughter (Ellen is, gasp, an unmarried mother in the 1970s).  He is now married to a rich woman and apparently he wants custody of their child.  Or is the sleazy creep after something else?

All shall be revealed.  The last paragraph is the best I have read in quite some time.

This is a first story?  Wow.  In  my experience first mystery stories tend to be short and rooted in the author's immediate experience (and nothing wrong with that).  This one is a novella, or pretty close to it, and set forty years ago in a foreign country.  Although, to be fair, Wilson spent six years in the city where it is set.

So, we are in Bad Kissingen, a German spa city near an American military base.  It is the late 1970s, and Hans Burg has just been assigned an important murder case, a young woman shot to death.  That's surprising because he is  a drinker and a screw-up.

More surprisingly, he seems to have no interest in solving this big opportunity.  Instead he is pursuing his "hobby case," a search for certain Nazi memorabilia, banned in West Germany.  Obviously Burg is up to something, but you will have to follow his steps to find out.  Along the way I learned about some nuggets of post-war history that were new to me.

A very satisfying and believable tale.  YOu can read the first few pages for free here.
Posted by Robert Lopresti at 11:14 AM No comments:

The Crucial Game, by Janice Law 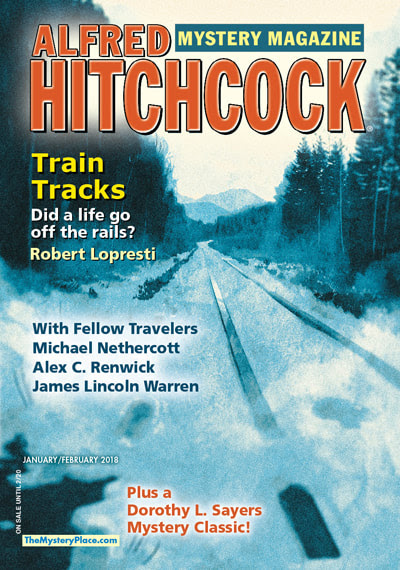 In her fifth appearance at this blog, my friend and fellow SleuthSayer Janice Law has offered a story that is more fantasy than mystery.  But never fear, it does have a criminal, or, as Ellery Queen used to say, criminous, element.

Ever since he lost his wife, Frank had immersed himself in sports, especially in his all-time favorite, ice hockey.

So we begin.   One day lonely Frank, walking through Manhattan sees, among the vendors, a "little makeshift stand offering sports CDs and DVDS..."  The merchant is "thin, almost gaunt, and very dark so that his large eyes gleamed above the bold cheekbones and the wide, and to Frank's mind, somewhat predatory nose."  Sounds a bit spooky?  How about when he calls "I have what you need"?  A cautious man would run but Frank invests ten bucks in a DVD of the 1994 Rangers v. Devils match.  "Take you back where you want to go," the vendor promises.

And sure enough, when he pops it in the machine and starts it, his apartment is suddenly back in 1994, and he hears his wife cooking in the kitchen.  Astonishing.  But, well, what happens when the last game on the DVD ends?

This story grabbed me from beginning to end.
Posted by Robert Lopresti at 9:58 AM No comments: