Underground Above Ground, by Robert Tippee, 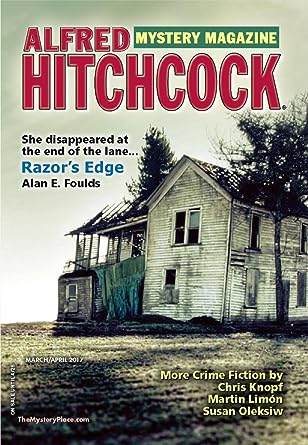 So, when do you know you are reading a terrific story?

Sometimes there's a knock-em-dead opening paragraph and you spend the rest of the story thinking: Don't blow this.

Sometimes a story starts slow and builds and builds.

And some stories take your breath away with a great twist ending.

In other words: I had to sit with this one for a while, as the saying goes.

The nameless narrator is a young man who has mastered the art of disappearing.  He dresses in black, with a stocking cap that hides his face.  And as the story begins, it is after ten PM and he is sitting in the darkness near a city tennis court, watching a young man and his beautiful girlfriend as they volley the ball, flirt, and discuss Facebook.

This is a guy with nobody to "friend" on Facebook anyway.  It's clear that there are bad things in our narrator's past, although it is not clear at first whether they were done to him, by him, or both.

And then the story takes several unexpected twists, which is all I can say.  Except this: I loved it.
Posted by Robert Lopresti at 10:23 AM No comments: It's rural Kentucky in the mid-eighties, a hard time in a hard place.  Davy is fifteen years old.  His father, a Vietnam vet, lost his job years ago and now puts food on the table hunting and fishing.  Dad has what we might call anger issues.  When his wife said something he didn't like he: "grabbed her by her hair, dragged her to the back door, and threw her into the yard.  'Come back in when you find a cure for stupid.'"

The fourth character in this situation is the family's landlord, Ben Daniels, the richest man in the county.  Daniels wants to bring rich tourists to hunt on his land, which means he has to stop Davy's dad from hunting there for the pot.  Oh, did I mention that Davy's mother is young and beautiful and when she is around the good-looking landlord has "busy eyes?"

So we have all the makings of a tragedy here.  The only question is who is going to end up doing what to whom.  And there Williams offers us some surprises, which is what I liked best about this well-written story.

"There are some things that need killing..."

Posted by Robert Lopresti at 10:30 AM No comments:

Most of this story takes place in May 1934, on the night Bonnie and Clyde died, although that has nothing to do with the story.  (Well, now that I think of it, it might explain a bit of one character's motivation.  Subtle, that.)  It's rural Texas and our narrator is a ten year old boy at a barn dance, with no less than Bob Wills and his Texas Playboys performing. He witnesses a murder, a pointless killing involving that ancient cause of trouble, an older husband a younger wife.

Then we jump to the same guy in World War II, and then many years later to his old age.  And only at that point does he, and do we, figure out exactly what was going on back in 1934.  I didn't see the twist coming at all.
Posted by Robert Lopresti at 7:00 AM No comments:

The Farmer and His Wife, by Earl Staggs

“The Farmer and His Wife,” by Earl Staggs,  Mystery Weekly Magazine, March 2017.

Ever notice that private eye fiction is full of missing daughters?  Ross Macdonald did.  One of his books begins: "It was a wandering daughter job."

Earl Staggs seems to have noticed, too, but he does a neat role reversal.  His P.I. is hired to find a missing son.  Oh, by the way, here is Staggs' opening sentence:


"She had me from the first teardrop."

"She" is the mother. Her son disappeared while working on a farm to earn college money.   And we won't go any farther, although, naturally, the hero does.
Posted by Robert Lopresti at 4:07 PM No comments: