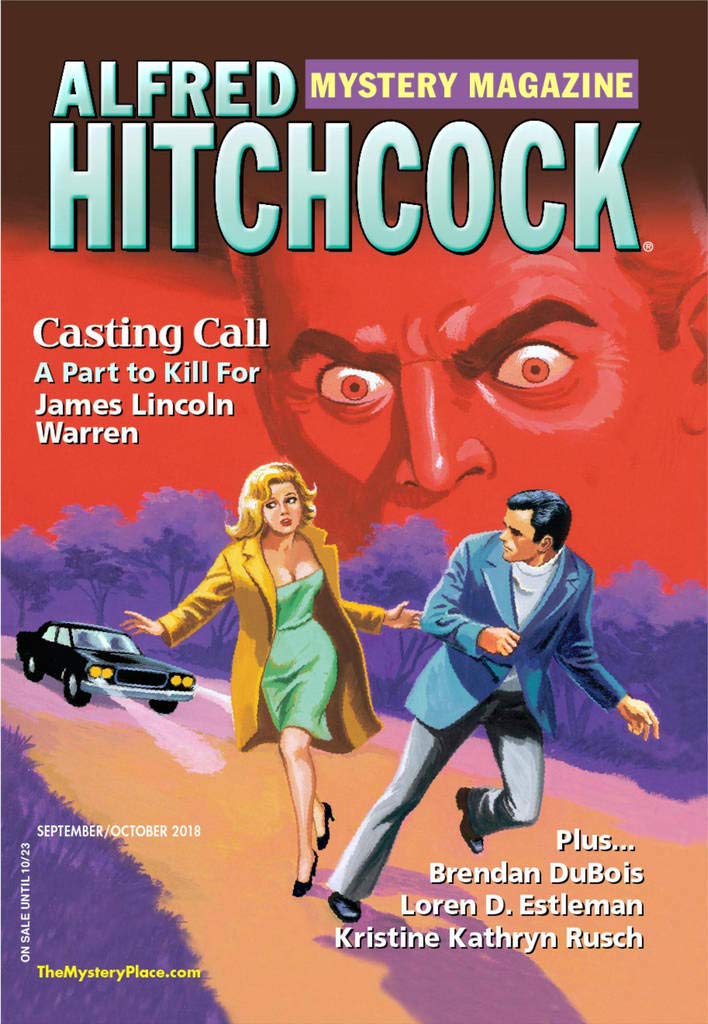 Rusch is one  of my favorite writers of mystery short stories.  She has appeared on this blog seven times, which ties her for first place with Brendan DuBois and Terence Faherty.  I believe she is more prolific in science fiction, which relates to this story.

It is strictly down-to-earth, but it is set in the world of science fiction fandom, and reflects on some events which have damaged that community in recent years.

Her series characters (making their third appearance in this blog) are dedicated members of the world of fandom.  The narrator, Spade, is a six-foot-six 400 pound Microsoft millionaire who uses his spare time and financial savvy to help with the money side of science fiction conventions.  His friend (and he wishes she were much more) is Paladin, a beautiful but brittle young private eye who specializes in fandom crimes and missing children.

Science fiction fandom is famous for tolerating or even embracing people lacking in social skills and these two have found happy homes in that world.  But the conflicts of recent years are threatening it now.  Although Rusch does not mention it by name she is clearly referring to the Sad Puppies debacle which reached its climax (or nadir, if you prefer) at the World Science Fiction convention in Spokane in 2015.  I happened to attend that event and you can read my interpretation of it here. To oversimplify, there was a group of people who felt that the wrong people were getting awards, and those wrong folks seemed to be mostly women and people of color.

Spade gets a call from the eternally-testy Paladin who demands that he rush to a distant ranch in Texas where some SF writers decided that they know how to run a science fiction convention better than the SMoFs (Secret Masters of Fandom) like Spade.  Their product is Unity Con which they were confident could settle the dispute between differing factions.

Instead one controversial writer, rumored to be a neo-Nazi, is dead under mysterious circumstances.  Money from the con's account is vanishing.  Can Spade, who despised the writer, solve both crimes before irreparable harm is done to his beloved community?

This is not a fair-play whodunit.  The emphasis is on the characters, whom Rusch makes you care about, and that raises the stakes for the world that they care about as well.

Posted by Robert Lopresti at 10:11 AM No comments:

The Cold Hunt, by Ken Brosky

I tend to think of didactic mysteries as being limited to novel-length, but they don't have to be.  The term simply means a piece of fiction that attempts to teach something, rather than just entertain.  Think of Dick Francis's novels that usually explore some industry or other field of endeavor: painting, trucking, glassblowing, investment banking...

Brosky's excellent story has an element of that.  He wants to tell you about the life of tigers in Siberia.

Roxy is a young American biologist.  She and her mentor, Dr. Siddig, have been called to investigation what appears to be a killing by a big cat.  The evidence of footprints and corpse show that the tiger had a big meal of the flesh of a local man.  But the evidence does not prove that the man was alive when the tiger arrived.

The villagers are ready to hunt and kill the beast.  Can the scientists prove it is innocent of the killing - if indeed it is?
Posted by Robert Lopresti at 1:00 AM No comments:

A nice story by my fellow Sleuthsayer, Eve Fisher, set as many of her stories are, in South Dakota.

The narrator is a woman in her thirties who has moved into an apartment house filled mostly with older people and thinks that's just fine.  Then a wave of new divorcees come in and, alas, they are the "mean girls" from high school.   Lots of requests for favors and "Is your husband out of prison yet?"

One of them disappears rather scandalously and then her body is discovered even more so.  The obvious suspect turns out to have an alibi.  Can our hero spot the killer before somebody else gets tagged?

I can't remember the last time an actual whodunit made it onto my best of the week page.  Well done.

Posted by Robert Lopresti at 7:09 AM No comments:

This is an anthology of crime stories about voter suppression, with the profits going to the ACLU Foundation.  It starts out with this light piece set in Massachusetts.

Our narrator is Thomas Coffee, a private eye who is hired by a rather obnoxious woman to find her father who vanished a few hours earlier.  In fact, a whole segment of the town has disappeared.  On the very day of the traditional New England town meeting.  Hmm...

Here is a bit of the flavor of  the place and the story:

In 1903 the Joppa Town Meeting accepted, by a vote of 128 to 126, a twenty-thousand dollar library grant from Andrew Carnegie.  The close vote showed that the only thing flinty New Englanders trusted less than outsiders was outsiders with money.

They may have a point.  Fun story anyway.


Posted by Robert Lopresti at 4:13 PM No comments: