West Coast Crime Wave is an e-anthology that was published last year.  I'm not a big iPad book-reader, so I am just getting around to it now.

This is a private eye story but you can kick that Humphrey Bogart image right out of your head.  Jackie Giacomo is  300 pounds of grumpy and he got into the business by helping some friends in the mob.

This is how it works: a firm -- either some mobsters or a hedge fund -- buys a bunch of shares in a company.  If that investment doesn't provide the returns they were expecting, they find dirt on the CEO or chairman of the board.  You know, drugs, cheating on his wife, sex with boys, that kind of stuff.  That's where I come in.  I follow Mr. CEO around for awhile  with my camera and take pictures of him doing his dirty deeds.  My client shows the offender snapshots of him playing priest to a choirboy and gives him an offer he can't refuse: buy the shares back at a premium and the photos don't accidentally find their way to the New York Post.

So speaking of choirboys, fat Jackie ain't one.  He is also living in San Francisco, in exile from New York because of  a disagreement with a mobster friend.  As the story opens he has a new case but it turns out to be connected to his New York troubles, which come from protecting one of the few people he actually cares about.

It is a fun twist on the P.I. story.
Posted by Robert Lopresti at 6:04 AM No comments: 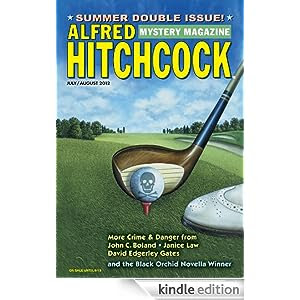 Well, Mr. Gates is having a good year.  This is the third time in nine months he has made my best-of-the-week list.  And the stories have been very different.  One historical, one urban, and now a rural police procedural.

Hector is a deputy in Montana, near a national forest.  When two kids report seeing a double-wide trailer explode he knows it was a meth lab.  Since the drug-maker went up with his product Hector could have let it go at that but he is a good cop and wants to know what happened: specifically, how did a Gulf War vet wind up making drugs out in the wilderness?  And which comes first, supply or demand?  The trail becomes darker and grimmer.

"With all due respect, don't preach the law to me."
"The law's all we've got between us and the stone age."
"Frank, for Christ's sake, this IS the stone age."


A powerful piece of work.

Posted by Robert Lopresti at 1:49 PM No comments:

Acting On A Tip, by Barbara Arno Modrack

I have said before that I am a sucker for stories about the possibility of redemption, whether the protagonist chooses to take it or not.  This is a nice example.

Marty had been a reporter for the Detroit Free Press for decades when the buyouts started.  One day his editor urged him to take the proffered buyout, and the reason clearly had less to do with his age than with the booze Marty was drinking for breakfast.

When he found himself unemployed and probably unemployable Marty's wife made him the following offer:

They would sell the house and move Up North to the family cottage she had just inherited.  Ryan, their youngest, would complete his senior year in high school there.  Jenny would refresh her nursing license and become the breadwinner.  And if they did all that and Marty quit drinking, they could do it together and Jenny would not leave him.

A few months later Marty is clinging to sobriety by his fingernails when he wakes to a radio report of three murders in the little town where they are living.  Maybe the Free Press would like a reporter on the scene?  Maybe he can drag a scrap of self-worth out of the ruins?

Very satisfactory piece of work.
Posted by Robert Lopresti at 8:24 AM 1 comment:

I am not surprised that Baron got his start writing comic books.  This is one of the most intensely visual stories I have read in a long time.  Or, to be more specific, the climax is wildly, inventively, visual.

Bill Scald is a restaurant critic (and what a wonderful name for a critic!). Much to his disgust his boss orders him to review a new Italian restaurant that is clearly owned as  a money-laundering site by a mob family.  Scald points out that in this case a bad review could have extremely nasty results.  His editor, blithely uninterested in such niceties as journalistic integrity, tells him to go off and say something nice.

So Scald decides to dine with protection in the form of  his nephew, "a human pit bull with shaved skull, tribal tats, and the flat eyes of a shark.  Dyson's favorite cuisine was buffalo wings, but he...was too stupid to know fear."  And that's when things get lively and, as I have already indicated, visual.  Fun stuff.

Posted by Robert Lopresti at 8:16 AM No comments: