This is the second appearance by my fellow SleuthSayer Art Taylor on this page.

All the stories in this book involve crime and time travel, as you can probably guess from the title.  If you are going to write about time travel the first thing you may need to decide is the method involved: science or some form of magic?  Of course, you don't need to go into detail; when he was trying to sell Star Trek Gene Roddenberry pointed out that a starship captain doesn't need to explain his vehicle's propulsion system anymore than the star of a Western needs to describe the anatomy of a horse.  But it's nice if you indicate whether your hero has built a machine, or has supernatural powers, or is simply in the right (?) place at the right (ahem) time.

In Taylor's story the transportation system is a deep psychological truth.  In fact, I think the whole story is a metaphor for certain human interactions.  But hey, no spoilers.

The man and the woman had reached that stage where their relationship would either turn more serious or slowly begin to dissolve.  The seriousness wasn't about sex, a threshold they'd already crossed, but a step into some deeper, more emotional intimacy.

That's how our story begins.  Nice style, isn't it?  We never find out the names of the characters, because those don't matter.

What does matter is that the man asks his lover to tell him something special about herself.  And she does, about something that hurt her badly, a long time ago...

This fine story gives you a lot to think about. 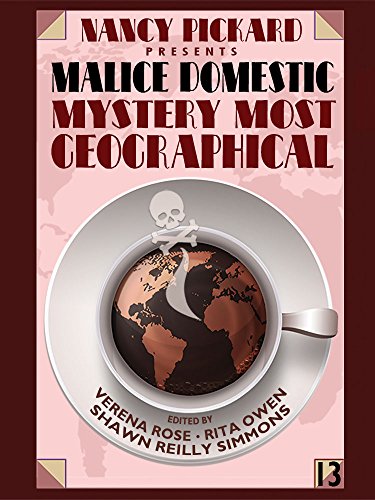 This is Anita Page's second appearance on this blog.

There is a TV series called Penn & Teller Fool Us in which magicians from around the world try to outsmart the titular wizards.  This spring there was an extra episode called the April Fool Us Special, which looked back at some of the highlights.

They mentioned a kind of viewer feedback they sometimes get.  I am going to make up the details but it goes like this:

How could you be fooled by that man making an elephant appear?  If you look at the tape you can clearly see him tuck the elephant up his sleeve!

To which Penn replied, approximately, We didn't know in advance that it was an elephant we should be looking for, and we don't get to roll the tape back for a second look.

Which is sort of like foreshadowing in literature.  Once you finish the story it is easy to see the one clue tucked in among a thousand details.  But when you're reading it, not knowing where the story is going, you can't tell which of those details is the crucial ones.

I don't think I have given away the store by telling you that Page has some clever foreshadowing in here.  You still won't spot the elephant before she reveals it.

The narrator is an old woman, relating  how she came to America from Russia at the age of fourteen in 1911.  The reason for the voyage is that her mother has just received a message that "your Isaac has taken up with a whore from Galicia."  Is it just me or does it seem like Galicia is the most offensive part of the whole thing?

So our narrator's mother wants to find her husband and reunite the family.  They start out on the difficult voyage, and things happen.

One of the reasons I started this review by talking about magic is that it matters in this story.  The family is divided between the father and narrator who you might describe as new-world rationalists, and the mother and sister who are subject to old-world superstitions, believing in demons and lucky charms.

A question that comes up in the story more than once is: Does magic work if you don't believe in it?  Page offers an answer to that in this excellent tale.

Posted by Robert Lopresti at 8:18 AM No comments:

A Gathering of Great Detectives, by Shawn Reilly Simmons

All the stories in this book take place at conventions, conferences, club meetings, or the like and part of the fun is seeing how the authurs use that.  Simmons features, largely enough, a mystery weekend.

The twist is that all the guests - and hosts - come dressed as great fictional detectives, and are penalized if they dare to speak out of character. Now Inspector Bucket (from Dickens' Bleak House)
has tumbled down a flight of stairs and two genuine cops are trying to figure it out how it happened.

Their big problem is that the suspects and witnesses think they are part of the act and start ringing penalty bells if they try to speak as if this was a real-life event.  Funny, and bizarre.

I may be prejudiced in favor of this story because it reminds me (in a non-plagiarizing way) of my story "Shanks Gets Killed," which also involves a murder weekend and a Maltese Falcon-related prize.  But in any case, Simmons has given us a fun read.

Posted by Robert Lopresti at 7:16 AM No comments:

"Red's White F-150 Blues," by Scott Montgomery, in Murder on Wheels, Eleven Tales of Crime on the Move, presented by the Austin Mystery Writers, Wildside Press, 2015.

The editors sent me a free copy of this book.

Red Clark spends a lot of time taking care of his baby son, because the factory put him on half time and Britney has had to take on more nursing shifts at the hospital.  One day his old friend Billy Ray - part-time drug dealer and non-stop trouble -- shows up to ask a favor.  The bank wants to repossess his truck.  Can he hide it in Red's garage for a while?

Of course, Red says yes.   Of course, Britney gets mad.  While they're arguing about it - and about meatloaf and other affairs of state -- the TV announces that a guard was killed in a bank robbery.  Police are looking for a certain truck.

What follows are a lot of bad decisions, some startling secrets and - oh yes - a beheading.  This is pretty much what Texas noir means to me.
Posted by Robert Lopresti at 6:52 PM No comments: