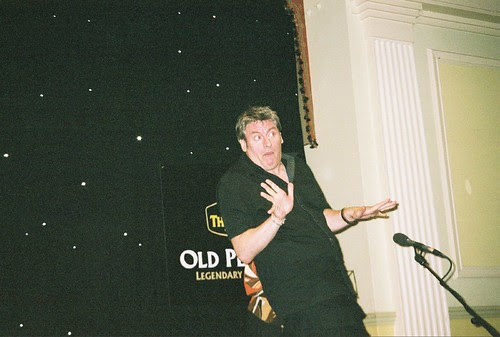 I have been reading mostly web-based stories this week and getting frustrated by them. Here is the plot I seem to read over and over: bad guy meets bad guy. One of them gets killed.

Okay, it's a story, I guess. In fact it is the plot of "Loaded," which I reviewed here last week. But by itself, it is not enough. You have to make me care what happens, which bad guy gets killed.

There are lots of ways to make the reader care, and I will discuss this at length in a week or two at Criminal Brief.

But here is one method: give the character a shot at redemption. Whether they take it or not isn't the issue. Give them chance to redeem themselves, to fix the broken part, to take back the mistake. (Ever see the movie In Bruges? It is a sardonically funny, bloody little film, well worth seeing. All three of the main characters, two hitmen and a gang boss, find their individual redemptions in the end, turning out to be slightly better people than we - and maybe they - thought.)

Which brings us to the end of the rant and the beginning of the rave. I have never heard of Martyn Waites before but his story "Love" is one of the highlights in London Noir. The narrator is a skinhead, a racist foot soldier of a racist movement.

Fists an boots an sticks. I take. I give back double. I twist an thrash. Like swimmin in anger. I come up for air an dive back in again, lungs full....

Then I'm not swimmin. Liquid solidifies round me. An I'm part of a huge machine. A muscle an bone an blood machine. A shoutin, chantin cog in a huge hrtin machine. Arms windmillin. Boots kickin. Fueled on violence. Driven by rage.

Lost to it. No me. Just the machine. An I've never felt more alive.

Is there a chance for redemption for this guy? Can he retrieve himself from the machine and find his own humanity?

Yes, but this being noir, the cost is extremely high. Impressive story.
Posted by Robert Lopresti at 5:10 PM