Before we get to the story I have to start out with a grudge and a gripe.

My grudge is this: as a writer for a previous Akashic anthology, and as a guy who spent his first 30 years in New Jersey, I was hoping for a chance to submit to this book.  Wires got crossed and that never happened.

Not a big deal, and I only mention it because, as I said, I have a gripe, and full disclosure applies.  You have a right to decide whether sour grapes are speaking here.

Now for the gripe: There are 1,300,000 African-Americans  living in New Jersey, making up 14%  of the population.  And not one of them was willing or able to write a story for this book?  Seriously?  Not typical for Akashic anthologies, either.

Joyce Carol Oates, the editor, knows it's a problem.  She mentions it in an interview with Publisher's Weekly.  "We tried , tried, and tried" to get African-American authors, she says.  Okay, but it sure looks like a big part of the state is missing.

When a white rookie police officer kills an African-American man in Camden, one of the most Black and deadliest cities in the Garden State, trouble is pretty much guaranteed to follow.  So, even though almost the entire story consists of a lawyer interviewing the cop, there would be plenty of natural suspense here.

But Manfredo manages to ratchet it up a notch: the rookie is the son of an up-and-coming Republican politician and the attorney sent to rescue him is a well-entrenched Democrat.  In other words, the future of the reformer's family depends on the skills and motivation of the party hack.  How is that going to work out?

I wouldn't say there is a surprise ending, exactly, but there are some surprising revelations that will make you see the story from a new point of view.

And consistently good writing, too.  Here are two attorneys discussing  the rookie:

"This young cop has his own political juice, courtesy of his old man.  If becoming a cop was all he really wanted, his father could have gotten him assigned to bikini patrol in some shore town or crabgrass stakeout in our neck of the woods.  Why would he want to go to Camden?"
"Maybe," Cash offered with little conviction, "he just wants to be a real cop."
Posted by Robert Lopresti at 9:09 AM No comments:

Carrot For A Chestnut, by Dick Francis

"Carrot For A Chestnut," by Dick Francis, in Field of Thirteen, Putnam 1998.


Well, it finally happened.  I read a lot of stories this week but didn't come across any I liked enough to write about here, so I went to my list of fifty favorite crime short stories and picked one.

Here is something that bugs me: people who hit a grand slam their first time at bat.   Just doesn't seem fair somehow.  Supposedly Sheebeg Sheemore was the first tune O'Carolan ever wrote.  And then there are the first novels that turned out to be the best things the authors ever did.  (That can be thought of as a curse, can't it?)

I hadn't realized until I prepared to write this piece that "Carrot For A Chestnut" was Dick Francis' short story.  Sure, he had been writing for novels for years, but he hadn't tried the short form until 1970 when Sports Illustrated invited him to try his hand - "length and subject matter to be my own choice."

Francis, rather famously, tended to follow a formula in his novels: they were all written in first person, the hero was often a jockey, and was brave, resourceful, and chockful of integrity.  Perhaps it was no surprise that, when considering a short story, he decided to go in a different direction.

Yes, Chick is a jockey.  But his story is told in third person and he is a "thin, disgruntled nineteen-year-old who always felt the world owed him more than he got."   Now Chick has a chance to get a little more, by giving a carrot to a horse in the stable where he worked.  The carrot is dosed with some chemical that will undoubtedly damage the horse's chance at winning a race.  Is Chick willing to betray the people he works with, the people he feels don't treat him well enough?

This is a tale of suspense with a slamming climax.  But the reason the story makes my top fifty is the twist ending that makes everything worse...
Posted by Robert Lopresti at 11:23 AM 1 comment: 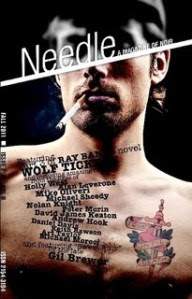 I may have to demand my money back.  Needle calls itself "a magazine of noir," but this story isn't noir; it's hardboiled.   Jack Bludis created the classic distinction: "Hardboiled = tough.  Noir = screwed."

But on the other hand, I like hardboiled better than noir, so I suppose I shouldn't complain.

Ray Hannah is an attorney in Hyannis.  His stockbroker calls to report finding a dead body, specifically a crooked hedge fund manager who is one of his clients.   Somebody beat his head in with an antique golf club.

Motives start piling up as last as lies, which is very quick indeed.  Some of the plot twists are easy to see coming, but one caught me by surprise.  The writing is low-key and precise.  And Morin shows proper respect for Italian cooking.  Buon appetito..
Posted by Robert Lopresti at 9:47 AM No comments:


When I found out about the disappearance of Swiss gourmet Pascal Henry, I had no doubt that his body had become part of the larder for the liquid croquettes offered on the degustation menu at El Bulli.

Did that opening sentence get your attention?  It certainly grabbed mine.  I should say that Barba's story of madness, murder and cannibalism is not going to be to everyone's, uh, taste.  But it is fascinating and, as it rolls to a bizarre conclusion, hilarious.

The narrator has a job in his family's butcher shop and a wife who has become obsessed with literature at just the point when her husband has sworn never to read another book.  Not a recipe for marital bliss.  The narrator's ambition is to be a great chef and he becomes obsessed with the workings of the high-tech gourmet restaurants of Barcelona.  As you can tell from the first sentence, he draws a conclusion about their secret ingredient, and decides to experiment on his own... in more senses of that phrase than one.

A wild ride.
Posted by Robert Lopresti at 3:47 AM No comments:

To my mind one of the worst phrases used to advertise a crime story (next to "transcends the genre) is "This time it's personal!"  As Jon L. Breen wrote "I think the necessity for the series detective to suffer enormous physical and/or emotional trauma in every book and to be personally involved in every case is one of the worst trends in contemporary crime fiction, but I’m not typical."

Maybe you aren't typical, Jon, but you are right, because you agree with me. In fact, in the same e-conversation I wrote "Those books are self-limiting in a way. How many times in a series can the detective be betrayed by his lover, best friend, etc., before the series begins to look a little silly? Only in TV do they get away with that sort of stuff."

But the self-limiting issue doesn't apply to a one-off novel or short story.  Take this story of a cop named Michelle Evans investigating a murder.  "With a twinge of anxiety, I realized I now had a personal connection to the case...It happened from time to time.  And it always made me nervous when it did."

A woman is found shot to death in her house, but clearly she had been killed somewhere else.  Her one year old child had been returned to the home.  And she had volunteered at the church where Detective Evans' lover used to work...

I like the way Mackay uses the personal involvement in the story.  A lot of cops say one of the hardest parts of the job is that they find themselves using their work skills on their friends and families and that is what happens here.  When Evans talks to her sweetheart about the case "I detected regret...  I observed guilt and evasion."  How is she supposed to react?  As cop, or as lover?
Posted by Robert Lopresti at 7:37 AM No comments:

Who I Am, by Michael Z. Lewin

"Who I Am," by Michael Z. Lewin, in Ellery Queen's Mystery Magazine, December 2011.
Mr. Lewin becomes the second author (after James Powell) to appear in this column twice. This story raises the question: how do you make a genre story new and unique?

For instance: Indianapolis private eye Albert Samson gets a client whose house has just been robbed.  A few things of no great value were taken, plus a memento of his father.  Samson investigates and finds the culprit.

Well, okay, but we've all read that one a few thousand times before, haven't we?  What makes this story different from the others?

Just one thing really.  Samson's client, who calls himself Lebron James (but isn't the famous basketball player) claims that his father was a space alien.  Samson doesn't believe it, of course, but he does believe the roll of hundred dollar bills Mr. James pays him with.  This is apparently the first in a series of stories about a rather sympathetic guy who his neighbors call "spaceman" and "the weirdo."  I'm looking forward to more.
Posted by Robert Lopresti at 9:33 AM No comments:

The Investigation of Boyfriend #17, by Maureen Keenan-Mason

"The Investigation of Boyfriend #17," by Maureen Keenan-Mason, in Ellery Queen Mystery Magazine,  December 2011.


If you look back at your notes from previous classes you will find that I said the one thing the opening of a story must do is keep the reader reading.   I mentioned that there are lots of other things the opening can and probably should do.  One of them is to tell us what kind of a story we are about to read.  It is easy for the opening to tell us: this is noir, get ready for a cosy, there's going to be spooks here, or whatever.

On the other hand, sometimes it can be fun to have no idea where a story is going.  That's what Keenan-Mason pulls off in this tale.

Lila is a twenty-four-old woman who, after several bad experiences, has started investigating each boyfriend. She has a locked desk where she keeps files on each new swain, checking out their stories to see if they have a wife, criminal background or other no-no in their past.

The tone is light but there is an element of creepiness here (does Lila have a hobby or an obsession?  ToMAYto, ToMAHto) and I could easily the story going into nasty territory with either Lila or a boyfriend getting very wicked.  The fun here is not knowing until near the end which road we will be traveling...
Posted by Robert Lopresti at 9:07 AM No comments: